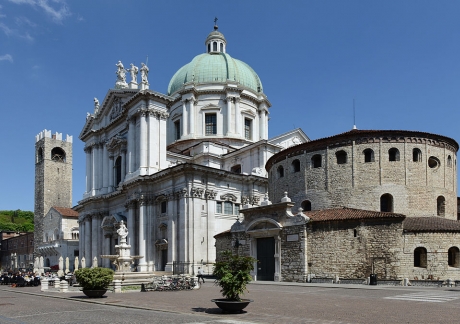 BRESCIA
The city of Brescia looks like a lively resort with a historic center among the most beautiful and still linked to the Roman era. Visit the Roman Forum, the museum complex of Santa Giulia. The Duomo or rotonda, for its form, erected in Romanesque style, was subsequently reworked.

The new Duomo, however, was built at the beginning of the 18th century on the airstrip of a early Christian basilica.
Loggia Square is the heart of the city center. The loggia, today the palace of the commune, dates back to the time of Venetian domination. On the opposite side of the square we have the elegant clock tower of 1540. For its location Garda Hotel is not only seen as Hotel Brescia, but also as Hotel Castenedolo, Hotel Ghedi, Hotel Castiglione delle Stiviere right by the proximity to some countries Of the province of Brescia as Castenedolo, Carpenedolo, Castiglione delle Stiviere, Ghedi and other places like Lonato and Isorella.